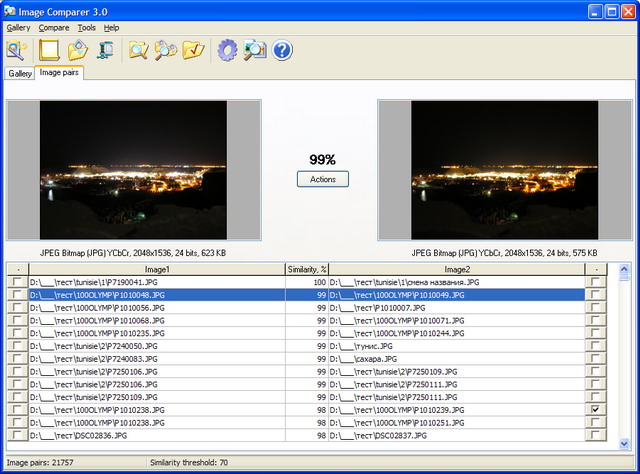 Scans your entire collection of images, analyzes their contents and locates files that look alike.
This offer is just for today October 11/2007 via giveawayoftheday.com

Image Comparer analyzes your digital images and automatically selects the best shot out of the many duplicates, allowing you to move or delete duplicate images in a couple of mouse clicks. Image Comparer uses content based image search also known as content based image retrieval.
Unlike similar products, Image Comparer does not just look for exact duplicates. Instead, it analyzes and recognizes an image’s content, and groups pictures that look alike. You can specify the level of visual similarity that is sufficient to consider pictures to be duplicates. View them in pairs or see the top ten similar images and keep the best one!
Image Comparer is extremely useful to professional photographers, designers, and webmasters, who have “image-heavy” sites to maintain. The program is incredibly fast; after a minute or two one can see how many duplicate images are stored and how much disk space will be saved by removing the duplicates. The “dupes” can then be removed all at once with one click. Alternatively, a user can specify which images need to be deleted, moved or copied.
The list of supported image file formats includes RAW, JPEG, J2K, BMP, GIF, PNG, TIFF, TGA and other.