There is an important thing present in advertising and other design uses, that we call semiotics. Actually, it’s present in everything in our lives, so deep that we don’t always pay attention and it happens naturally. So, what is this thing that surrounds us and is so important for design and advertising? The semiotics is the study of signs, and through them, it studies the origins of meaning in different languages of communication.

It goes deep into communication languages, verbal or non-verbal, to even understand why we think about the image of a rose when we hear the word “rose”. Why is this sound or theses letters connected to this object? What is the relation between them that makes the meaning? And more, why do we think about passion when we think about the rose? Though? Just a little, but we’ll talk more about it and show how to use this knowledge for communication and persuasion.

What do we need to know to make use of semiotics?

First, know what is a sign and its kinds. A sign is anything that makes meaning. Anything? Sure, if you see/hear something and understand that, it is a sign. They are the mediators to the world. According to Saussure, the signs have two aspects: signifier and signified. The first one is the material that has a meaning and the second one is the meaning. For example, the open sign is the signifier, while the signified is that you can go in. 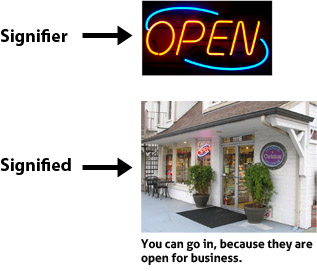 The use of semiotics in our lives

Now let’s see the kind of signs according to Peirce and then analyze some things in our lives on which we can see the use of semiotics.
The three kinds are: 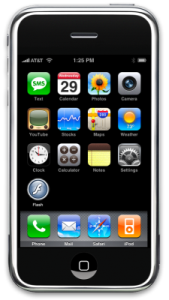 Here we can see some real icons (representation of the object itself) like the calendar, the camera and the clock. Also, some indexes (signs that have a connection with the object, but it’s not its real representation) like the stocks, You Tube or mail. If they were real icons, there should be a photo of a stock exchange, a thumbnail of a You Tube video and an electronic mail image. Finally, we see also a symbol, for Flash. There’s no visual connection from the Flash “icon” to the real meaning.
There’s no specific indication of what is that, but we know, because there’s a previous knowledge that Flash is an application for animations (ok, this image – flash – is not real, but useful for educational purposes). The designers who projected this screen were aware of the signs and its meanings, as we all shall be when designing anything. It is important because it’s the base for communication, which is the final purpose.

Thinking about these three kinds of signs, what do you think is the most used in advertising? Symbols. The symbol is the last step of comprehension, which brings on subjective ideas and concepts. Of course, the signs in general belong to these three categories, but each one has its predominance, so we are ignoring the less predominant kinds.

Example I: Words hurt too 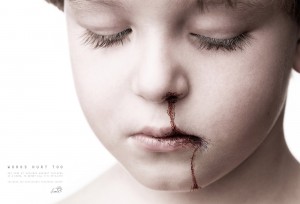 Let’s start with this clever ad about verbal violence (click to enlarge). The main element is the boy’s picture. So, you instantly think: “it’s an icon, because icons are real representations like photos”. Ok, but no. It is surely an icon, yet more than that. As we said that all signs can belong to the three kinds, this one is more symbolic. See, the boy looks upset, looking down, pale colors, showing sadness. These perceptions are primary indexes, because the eyes looking down, for example, is an indicator of sadness. BUT when we understand that this boy has suffered violence, it becomes symbolical and subjective.
The “words/blood” coming out from the boy’s nose is another index (indicating violence) that becomes a symbol. There’s no real blood, the written words are giving this idea, again, subjective. If I didn’t know what is this about I wouldn’t understand the image, it was important to have a previous knowledge about the concept “words hurt too”. 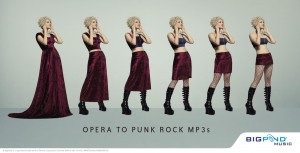 Here we see the same woman, with same hair and same position creating a totally different look only by changing the clothes, from opera style to punk rock style. Obviously, the main sign is the clothes, and again, symbols. There’s the convention that the first style of the woman (composed by a long red dress – all symbols in this ad) is more classic adequate to opera, while the last look is more rebel, according to the punk rock style (boots, pantyhose, mini skirt and top). The transition between them illustrates the concept “opera to punk rock mp3s”. 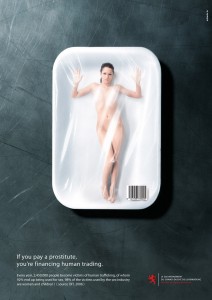 Now see this ad about prostitution. The main elements are a meat package and a woman inside of it. Why is this combination so strong? First, this kind of package is known as meat package, distributed largely in supermarkets, as a common commodity. When they put the image of a woman instead of the meat there’s a clear comparison with the woman – a prostitute – and a piece of meat. The woman becomes a symbol, provoking feelings like surprise, repulse, shock and impact. Nobody would like to treat a human being as a piece of meat, that’s when we read the concept “if you pay a prostitute, you’re financing human trading” and the whole idea clears up.
This article is just a brief view about semiotics and interpretations, the real thing is much more complex and complicated. We indicate some good books to go deep into semiotics concepts like “This Means This, This Means That: A User’s Guide to Semiotics” by Sean Hall, Theory of Semiotics by Umberto Eco (largely known name in semiotics) and Semiotics and the Philosophy of Language also by Umberto Eco. To conclude this article, there is a nice video that explains in an easy way some aspects about semiotics.

Video: Semiotics, The stuy of signs.

11 thoughts on “Semiotics: A Powerful Communication Tool For Designers”